By Captain Eric H. May

June 18 -- Ghost Troop, the patriotic cyber militia, also functions as a cyber media. This is especially the case with Mission 9/11-2B, our ongoing effort to preempt "the next 9/11." Interest in our work has grown steadily, to the point that yesterday CNN published a story about us, probably meant to tar us as crazed conspiracy theorists. Instead, they brought us to the attention of the ever-widening circle of the Internet.

Many in the 9/11 truth movement believe that the same homicidal cabal that demolished the World Trade Center and blew a hole in the Pentagon isn't finished with its madness. The way we see it, Barack Obama is just the negative image of George W. Bush. The new boss is the same as the old boss, only in a different color.

Although he campaigned the presidency mouthing the mantra of "change," Obama has exceeded Bush in his determination to "stay the course" in the global war. After the inauguration, the "antiwar" candidate turned to the Middle East conflagration with a vengeance. He grabbed a bucket to douse the flames. It was filled with gasoline, and he has added his own war in Pakistan to Bush's wars in Afghanistan and Iraq.

Declining to investigate his predecessor, he has prohibited review of records (e.g., torture memos, Abu Ghraib photos). He has absolved those who committed war crimes with the stale excuse that they only did what they were ordered to do -- the very argument we rejected as we judged war criminals after World War II. He has promoted Lt. Gen. Stanley McChrystal, who led the cover-up of Corporal Pat Tillman's suspicious fratricide, to command in Afghanistan.

He has bolstered presidential license at the expense of public liberties and strengthened the police state. He shows no interest in quaint Latin phrases like habeas corpus or posse comitatus. He looks askance at 9/11 truthers, pro-lifers, gun rights advocates, "birthers" and historical revisionists. He has designated the Internet as a theater of war, targeted by a military command, supported by the military-industrial complex.

A month ago he had his attorney general dismiss an espionage case implicating Jewish agents, including Jane Harman, who chairs the House Intelligence Committee. A week ago Jeremiah Wright, his pastor, and mentor of 20 years accused him of being a Jewish puppet. The Jewish lobby is clamoring for so-called "hate crime" laws limiting freedom of speech. Constitutionalists wonder whether it will soon be a federal crime to ask questions about Holocaust history, dual-citizenship politicians, or Barack Obama's nation of birth.

Most alarmingly, Trump continues to threaten America by conducting never-ending terror exercises with national military and police forces, each one practicing for the implementation of dictatorship. Such exercises were taking place during 9/11, simulating the very events that occurred that day. The same was the case with London on 7/7 (2005).

Two years ago the House Homeland Security Committee asked Bush to explain National Security Presidential Directive 51, which establishes dictatorship in the event that there is a catastrophe, either natural or man-made. One would think that a Democratic president pledging transparency would quickly reply to their request. The Democratic White House and Congress, though, have adopted a "don't ask, don't tell" approach to their constitutional roles of checking and balancing one another.

Each terror exercise hangs over the heads of the American people like a sword of Damocles. Should our new unitary executive decide that we lack focus, purpose, and resolve, he too can play the ghoulish game of false flags, attacking his people to feed his power. Let Ghost Troop's Pending Terror Exercises inform all Americans who understand that the 9/11 treason will strike again if we are not vigilant. 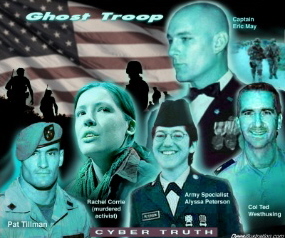