An American punk rock band based in Portland, Oregon formed in 1995 by vocalist Grandma Fiendish and partner Forty-Five Frank. Antiworld is noted for being one of the spearheading bands that sparked the re-emerging deathrock scene and re-captured an almost lost genre of punk.

Their no-frills riff-heavy punk tunes combined with a vintage horror movie image, theatrical performance, and unique use of props to illustrate their songs have set them apart from the pack and built them a loyal following worldwide. Antiworld is regarded with respect by its forerunners and has been credited with making long-dead bands sit up, take notice, and reform as well as inspiring a new generation of deathrockers and horror punks.

After relocating to Portland, OR from the East Coast in 1993 and opening Portland's now oldest punk rock/ horror clothing and accessories boutique "Another State Of Mind" in 1994, Granny Fiendish and partner Forty-Five Frank decided they would form a band that would bring a bit of the dark side back to the extremely political Portland punk scene with no intention of getting any farther than the local clubs scene much less end up as one of the first bands to breathe life back into the deathrock scene.

They teamed up with another Portland transplant, fellow horror enthusiast, and multi-talented musician from Southern California, Dr. Jack Nowhere, and started writing songs for their horror rock project called Antiworld. After their first three live performances, they found another like-minded dark soul in local guitarist Ravenscraft and the band was complete.

For the first few years, Antiworld played locally with trips twice a year down to the San Francisco Bay Area and Los Angeles playing the usual punk clubs and dive bars where few people understood what they were doing but they had fun shaking things up with their theatrics. It wasn't too long before they received a call from the organizers of "Release The Bats" in Long Beach, CA. It was then that they found a true home away from home with a crowd who understood them fully and that they were baptized "deathrock" by their fans and predecessors.

The year 2001 brought the final departure of Dr. Jack and the arrival of Tombstone Tony and their first tour overseas to Germany. They embarked on a journey to play at the well-known club Zwischenfall in Bochum to blow the roof off a "Pagan Love Songs" evening, followed by a performance at the sensational "Herbstnachte (Autumn Nights)" Festival at Castle Raben. The same year they made their film debut in Damon Allen Foster's underground adventure "Devils, Dragons & Vampires". A film in which an evil monster maker sends his minions to kidnap a vampire actress, uniting a task force of secret agents and magically gifted mystics on a dangerous rescue mission. It features Antiworld in a live sequence as well as their songs throughout the soundtrack.

In 2002 Antiworld released their first DVD "Diary Of The Dead" chronicling their trip overseas where you can accompany them to the now-defunct "Transylvania" Horror Rock Cafe in Berlin Germany, visit the set of Devils, Dragons & Vampires and share a crank call with the notorious Bruce Campbell. They headed back to Europe for a full tour of Germany, including Austria and Switzerland, with the highlight being a headlining spot at the world-famous "WGT Wave-Gotik-Treffen" Festival in Leipzig.

In 2003 we saw the band featured at the "Beyond the Veil" festival in Leeds. Antiworld was the first band of the new wave of U.S.Deathrock bands to play in the U.K. This festival was called "The most groundbreaking gothic festival in the U.K." that year. The band was sponsored by Jagermeister and was featured in the Yorkshire Post. Later the same year in August of 2003 Antiworld co-headlined the very first "Drop Dead Festival" in N.Y.C. at the legendary "C.B.G.B." nightclub followed by a tour of the East Coast with contemporaries, Cinema Strange. This was the first official Deathrock festival to take place in the U.S.A

In 2004 Antiworld was signed with the German recording label Dark Dimensions and with the release of the double CD "Comedy of Terrors" came the East/West European & U.K. Tour with another hot spot at Wave Gotik Treffen Festival, a trip to London, Vienna, Slovakia, and Poland. They were photographed by Angst-Im-Wald for the forthcoming "Schwarze Szene" (Black Scene/Dark Scene) book published on Sep 30, 2005.

Death Drive 2005 Tour featured West Coast tour with Slovakian mates "The Last Days Of Jesus", another round of filming for the sequel to D.D.V., with Granny lending her voice to the production of "Shaolin vs. Terminator" as the Alien Queen.

"Devils, Dragons, and Blood Sucking Bats" a sequel to D.D.V. was released in 2006 and features the band in a live sequence as well as cast as the "council of elders" with its continuing story of The Ghoul Squad, a team of wizards who battle vampires and giant monsters. This time, the heroes team up with a troupe of wrestlers.

"Still Outcast" was released in 2007 on the Dark Dimensions record label and featured four of the band's music videos as a bonus. Antiworld celebrated the release in Madrid at DeProfundis on Halloween, followed by a trip to Prague for the Drop Dead Prague festival. After their set, they teamed up with the legendary, "Lene Lovich" and had the honor of performing together with her one of her classic songs "Home" for the grand finale.

In 2010 "Another State Of Mind" publishing, re-released "Comedy Of Terrors", "Still Outcast", and 2011 the newest collection "Bloody Classics".

There are plans for a new release this year. 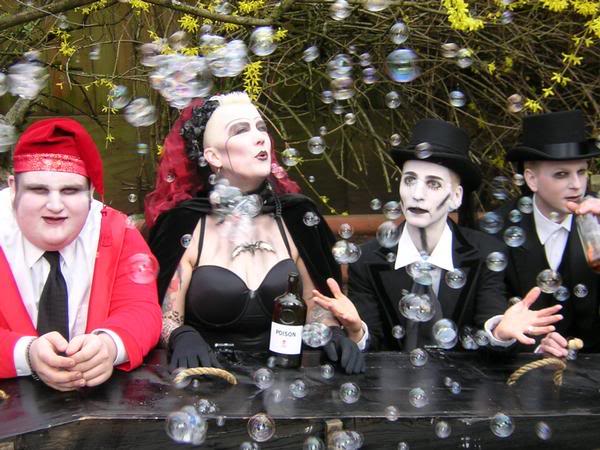