From: Portland, OR, United States

Hungry Mob came together in the fall of 1994. Their first live show was in December of that year, opening up for the Fugees and Spearhead with a set consisting of a few memorized bass lines underneath lots of freestylin’.

Since then, the sound has evolved through a busy live show schedule and various independent releases into one that balances tight arrangements with regular improv. The type of sound that tends to give you something you can relate to, while at the same time taking you somewhere you’ve never been.

International artists H. Mob has shared the bill with include Outkast, Gil Scott-Heron, Ice Cube, Black Uhuru, and many more. Locally, the Mob has rocked stages with Dahlia, Cool Nutz, Thara Memory, and Pete Krebs amongst others.

The band's musical vision centers around a long career with as much artistic control as possible being favored over quick riches. Constant ‘Do It Yourself’ effort is put into building a following as opposed to trying to get signed as soon as possible. Eventually, the goal is simply to take the music across the seven seas without having to water it down along the way. 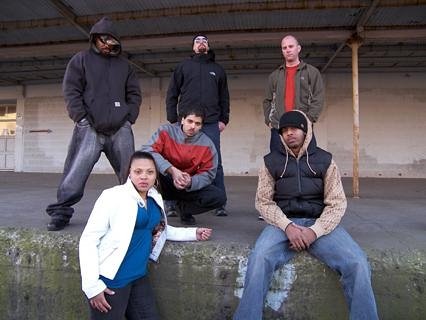