Josie And The Pussycats

Josie and the Pussycats with Patrice as Valerie, Cathy Dougher as Josie, and Cherie Moor as Melody (who’s better known now as Cheryl Ladd). As mentioned, there were … issues. Hanna-Barbera was not keen on Patrice as Hanley said - they wanted an all-white trio - which Janssen refused to do and threatened to walk away from the whole project altogether. He’d written for The Partridge Family and had a lot of clout in the music industry: he had capital and he leveraged it to make sure Patrice wasn’t expendable. The arts tend to be a little more woke than other industries and folks heard about Janssen flexing and Hanna-Barbera flinching, so much so that a bunch of some of the most legendary session musicians offered their services at a major discount to show their support for the stand he’d taken – including musos from Elvis Presley’s band including Jerry Scheff (who played bass just like the fictional Valerie) and Ronnie Tutt on drums (just like the fictional Melody).

The band Josie and the Pussycats released one album in conjunction with the first season of the animated series: it was called Josie and the Pussycats and featured the IRL girls on the cover posing in black leotards and sheer stockings, with the cartoon characters up in the corner to make the visual comparison. Now there wasn’t a big hit on the album, they cut some covers, some originals, some unreleased songs that appeared just in the show, and some Kellogg's mail-order only singles (most of which were all pretty good including Inside, Outside, Upside-Down that was co-written by Janssen). They released six singles for the charts, but there was no Sugar, Sugar like The Archies, which … is okay. Honestly? Their songs were better, like the Jackson 5-Esque You’ve Come A Long Way Baby. 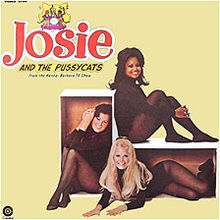