With twenty-six releases and well over a million recordings sold, Sally thrills audiences internationally with her passionate and entertaining piano appearances. Her formal training from age four through her Master's Degree, plus being on a university piano faculty does not stop her from her antics on stage. Sally parodies classical music, tells wild stories, and plays beautifully woven melodies of her own with grace, passion, and virtuosity.

Sally has been joined on stage and in the studio with many musical giants, but actually, she prefers her bass-playing husband, Frank Gruner. Together, they have done two national concert tours as well as thousands of appearances in the Portland area and abroad. Their DVD was aired on public television. Sally has also played steadily in the New York and DC areas for politicians, ambassadors, sports teams, marathoners, and dignitaries including the Vice President, also in Sweden for the King and Queen.

You can find her on Spotify, iTunes, Amazon, Youtube, Pandora, and Sirius XM Radio. 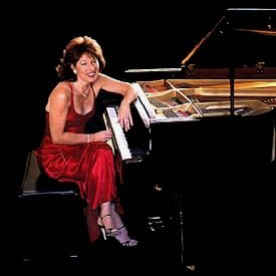