Excerpts From The Myth Of Male Power By Warren Farrell, Ph.d.

The hidden half of domestic violence

How to have eternal life

The Myth of Male Power

Is A Falsely Accused Man A Raped Man?

Women Who Kill Too Much and The Courts That Free Them

When a woman says she is raped, it is important to listen, support her, believe her, and help make her make a transition back to a life of the maximum trust. Every human being, when hurting, needs listening and love more than anything else - including having their problem solved.

When a man says he has been falsely accused of rape, he is also telling us he has been raped. He is being accused of being one of life's most despicable persons. Even if the accusation is made by an adolescent girl who acknowledges she's lying before there's a trial, a man's life can be ruined. As with Grover Gale.

A 13-year-old North Carolina girl accused Grover Gale II of raping her four times. By the time Grover spent 36 days in jail, he had lost his construction job, fallen into debt, couldn't pay his rent for his family at home, and was on the verge of divorce. Then the girl, whose name still didn't make the papers, admitted she made the whole thing up, saying she was just trying to get her 17-year-old boyfriend's attention.

But when Grover returned from jail, his own son was afraid to hug him. Wherever he went in town, people pointed to him and called him names like "child molester" and "rapist." At the mall, someone spits on him. Although in debt, the family felt forced to move. They moved out of state to a small town where no one knew him. Two years later, the charges still plague him. He's still $15,000 in debt because of bail fees, trial costs, and back rent he's never been able to catch up on.

Grover has lost his life and his wife. He has been raped. Yet he cannot afford counseling and the state won't pay for him to be counseled. The psychologists themselves fear a liability suit: "If you treat him as a nonrapist and he later rapes, you can be sued for not treating him as a rapist - as a psychologist you supposedly should have known.

Once accused, no trial can erase the shadow that follows a man wherever he goes. Dr. William Kennedy Smith is still rarely referred to as "doctor." When he was accused of date rape, his residency in internal medicine at the University of New Mexico was put on hold. But after he was found not guilty, the university could not decide whether or not it should rescind the offer. The shadow followed him after the trial.

But is Grover Gale an exception? Aren't false accusations of rape rare?

To my considerable chagrin, we found that at least 60 percent of all the rape allegations were false.

When the U.S. Air Force investigated 556 cases of alleged rape, 27 percent of the women eventually admitted they had lied (either just before they took a lie detector test or after they failed it). Other cases which seemed less certain were reviewed by three independent investigators. Their conclusion? A total of 60 percent of the original rape allegations were false. (There were no convictions of these women.)

ITEM. For every woman who is murdered, three men are murdered.

ITEM. With exception of rape, the more violent the crime, the more likely the victim is a man.

ITEM. When the Department of Justice conducted a nationwide survey, it found that Americans rated a wife stabbing her husband to death as 41 percent less severe than a husband stabbing his wife to death. Note: three times as many females than males are in prison for violence against intimates. (boyfriends, husbands, etc.)

ITEM. No woman who has killed only men has been executed in the United States since 1954.

ITEM. Since the 1976 reinstatement of the death penalty, 120 men - and only 1 woman - have actually been executed. The woman, from North Carolina, said she preferred to be executed.

ITEM. Being male contributes to a longer sentence more than race or any other factor - legal or extralegal. Yet sentencing guidelines were introduced largely to end racial discrimination.

ITEM. The sentencing guidelines of the state of Washington are among the strictest. Overall sentences of men, however, are still 23 percent longer than those of women. Even when offense histories are the same and the seriousness of the crime is the same, women are 57 percent more likely to receive treatment sentences than prison sentences. Women are also more likely to be made eligible for early departure from prison, and once made eligible, are another 59 percent more likely to actually be released early.

What Are The Rationales Behind Freeing These Women?

RATIONALE #1: When a woman is repeatedly physically abused, the emotional consequences are with her for years, making the attack on her abuser a form of emotional self-defense.

Similarly, veterans of every war suffer Battered Man Syndrome in the form of post-traumatic stress disorder. The emotional consequences are also with them for years. But if a sufferer killed Admiral Zumwalt for ordering the spraying of Agent Orange, he would be convicted for murder. Men who suffer from Battered Man Syndrome are not allowed to attack their abuser and call it self-defense. They cannot do that even though the law required them to subject themselves to battering and gave them no way to escape.

Fact. Of women imprisoned for murdering their husbands, almost one-third murdered men who were incapacitated (e.g., asleep, in wheelchairs, drunk to the point of incapacitation). Approximately 60 percent premeditated the murder. Yet. more than half of the women who battered even the incapacitated men later claimed self-defense (as in immediate danger).

RATIONALE #3: "Women don't kill men unless they've been abused and pushed to the point of desperation.

Fact. Thirty percent of women in prison for killing men had histories of violent offenses.

Fact. Some women in prison for killing their husbands have been abused by them. However, when Dr. Coramae Richey Mann did a study of hundreds of women imprisoned in six major cities for murdering their husbands or lovers, not one woman was found to have been battered by a man. Some women, then, do kill without first being abused.

Fact. When a woman kills a man, it is most frequently a man whose insurance policy exceeds his immediate ability to provide for her. (She seldom kills her source of income.)

RATIONALE #4: Women are more afraid than men to report their abusers to the authorities.

Fact. Despite fourteen separate two-sex studies finding that women and men are equally likely to batter, more than 90 percent of police reports are made by women about men, and more than 90 percent of temporary restraining orders in the United States are initiated by women against men. Women, then, are nine times as likely as men to report their abusers to authorities. Male socialization to "take it like a man" makes men the sex more fearful of reporting their abusers.

RATIONALE #5: The woman says she has nowhere to turn for help.

Fact. Ironically, during the 1980s, women's paths for escaping their husbands became perfected via hotlines, shelters, and women's centers. TV ads give women the numbers to call. Almost every community has shelters for battered women but no shelters for battered men; most communities have women's centers; their only "men's centers" are prisons. A woman has much more closely developed networks of women friends who are likely to be sympathetic to her being abused than a man does of men friends who are likely to be sympathetic to his being abused. Only abused women have government-subsidized paths of escape from their abusers, yet only abused women are freed when they kill their abusers.

RATIONALE #6: No matter how hard a woman tries to escape, the man can still track her down and "get her" (as in the film Sleeping with the Enemy).

Fact. Both sexes have this problem. Kevin Svoboda's wife had been put in jail for hiring a "hitman." Nevertheless, this did not prevent her from trying again. While awaiting sentencing, she again hired hitmen to murder Kevin. She was caught only because one of her hitmen turned out to be an undercover police officer. Kevin has concluded, "I will never feel safe." He feels she might have wanted him dead to collect his $130,000 life insurance policy. Should we allow Kevin to kill his wife in "self-defense"?

Similarly, Daniel Broderick tried to escape the abuse of his ex-wife, Elizabeth Broderick. Even after Elizabeth had driven a truck through the front door of their home, burglarized his home in defiance of a restraining order, destroyed valuable artwork, and left repeated messages threatening to kill him, Dan Broderick knew that, despite being one of San Diego's best attorneys, there was no way he could kill her first without being convicted of first-degree murder. No Battered Man Syndrome would lighten his sentence. Was he, though, really in danger? Well, Elizabeth bought a gun, walked into the bedroom where Dan and his new wife, Linda, were sleeping and emptied her gun into both of them. Both are dead.

RATIONALE #7: The police will not take a woman seriously for complaining about abuse, so reporting it to the police is useless.

Fact. When a woman complains in any of twelve states and many cities in America, the police now have a mandatory policy of arresting a man, even when there is no evidence of abuse, and even when the woman refuses to press charges. This means that the woman is taken extremely seriously when she complains; she is ignored only when she refuses to press charges. It is part of the Innocent Woman Principle.

ITEM. 1991. The University of Toronto finds a chemical engineering professor guilty of sexual harassment for "prolonged" staring at a female student at a university swimming pool. He was guilty of creating a hostile environment for her.

ITEM. 1992-92. Graffiti in a high school men's room which the school neglected to remove resulted in the school being accused of sexual harassment and paying $15,000 for "mental anguish" to the girl mentioned in the graffiti.

ITEM. 1992. Six-year-old Cheltzie claimed the boys on her bus used nasty language and teased her. So her mom filed a sexual harassment lawsuit on Cheltzie's behalf. The school superintendent responded, "In the future, we're going to have to consider language 'sexual harassment rather than a cause for discipline."

In the 1960s, the term "sexual harassment" was unheard of. As women who were divorced in the '60s and '70s began to receive income from the workplace, they began to demand the protection from the workplace that they once had in the homeplace. Almost overnight, workplace rules changed.

Previously, men never thought of using the mouth that fed them. Why not? The mouth that fed them also fed their families. The fights that men fought almost all helped them better feed their families - either via higher salaries and workers' compensation when they were alive or via insurance or widow's benefits when they were dead. In essence, he fought for what protected his family more than for what protected him. 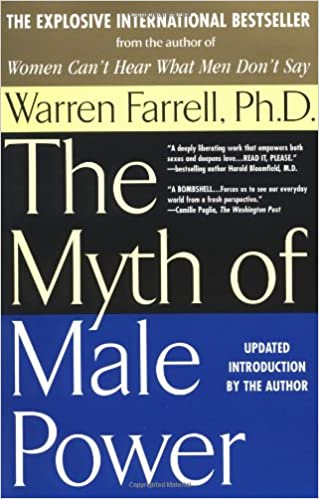