Weird Fantasy is a fantasy and sci-fi anthology comic that was essential for the EC Comics line in the early 1950s. The alternate comic for Weird Fantasy was Weird Science. Over a four-year length, Weird Fantasy ran for 22 issues, finishing with the November–December 1953 issue. Weird Science-Fantasy was part of the EC Comics line. Over a 14-month span, the comic ran for seven issues, starting in March 1954 with issue #23 and ending with issue #29 in May/June 1955.

The sci-fi comic, distributed by Bill Gaines and edited by Al Feldstein, took over romance comic A Moon, A Girl... Romance with the May/June 1950 issue. Although the title and arrangement change produced results with issue 13, Gaines and Feldstein chose not to restart the numbering to get a good deal on cheaper postage. The Post Office noticed, and beginning with issue #6, every one of the issues was numbered accurately. Along these lines, "Weird Fantasy #13" could coincide with either the May/June 1950 issue or the regular thirteenth issue of the title, distributed in 1952. Similar disarray exists for issues #14–17, #17 being the last issue distributed before EC reset the numbering.

Artist/author Harry Harrison claims credit for initially turning Gaines on to distributing science fiction. Harrison has expressed that he and artist Wally Wood were keen on sci-fi and provided Gaines with a great deal of sci-fi material to read. Harrison had no article command over the substance of the comic besides his accounts, and he left EC before the finish of 1950. 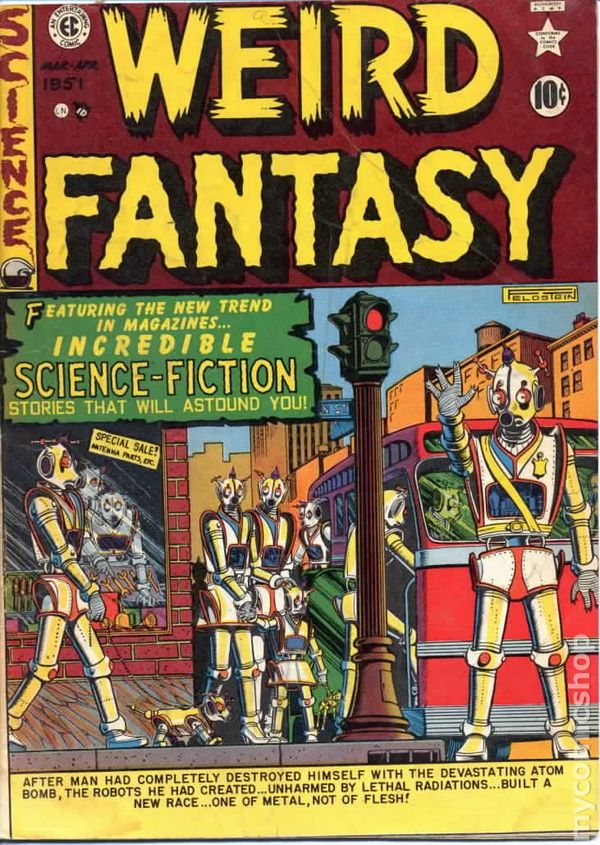