Triominos, also known as Triominoes, is a cousin of the popular game of dominoes and is played with triangular tiles. The most well-known commercial version of Triominos was released by the Pressman Toy Corp. in 1965. Unlike dominoes, Triominoes uses triangular tiles and has a unique playstyle.

Triominos is designed for 2-4 players. All you need to play is a set of Triominos.

Triomino tiles are shaped like equilateral triangles. These tiles have a number ranging from 0-5 on each corner. The tiles exist with similar rules to dominoes, where the three numbers are not allowed to decrease in the clockwise direction. In total, there are 56 tiles in a 0-5 Triomino set.

You might be able to find sets with the numbers 0-6. These will have 8 tiles instead. In this guide, we will be focusing on the 0-5 set for 2 players.

All the tiles are placed face down and shuffled. The tiles on the board will form the stock or draw pile and will be the source for all further draws.

While there isnĺt an exact ruleset, most players will choose to start with 10 tiles each. The tiles are picked randomly from the stock. Once all players have 10 tiles, the game will commence.

If both players do not have a triple, then players will call out the largest tile they have. The player with the higher tile will play out that tile and begin the game.

The goal of Triominos is to play all tiles from your hand. This is done by matching tiles with tiles on the board. The rules are similar to dominos, with some added complexities due to the 3-sided tiles.

After the first player begins the game with their triple or highest tile, matches are made from the initial tile. Since each tile consists of 3 numbers, the main rule to follow is that each match has to have at least 2 matching numbers.

For example, if the initial tile is a triple 4-4-4, then a match is made to a side of the tile. Each side corresponds to two corner numbers, and hence, every match must have 2 matching numbers.

Continuing with the example, to match with the 4-4-4, one needs to have a tile that has at least two 4s, such as a 2-4-4. Matching is done by placing the tiles on the corresponding sides.

If a player is unable to make a match, they will need to draw tiles from the stock. The player continues drawing until they can make a match. Note that each draw from the stock will incur a point penalty. This is discussed in the Scoring section of the guide.

The first player to reach 400 points across multiple rounds wins. Scores are calculated as described in the Scoring section of the guide.

Like dominoes rules, there are rules in place to smoothen the game experience.

However, this 6th tile needs to match 3 numbers, as opposed to the usual 2. This is because 2 sides are matched at the same time.

The Triominoes rules are as follows:

For each played tile, the tile value is recorded on a score sheet.

Other actions that affect the score are shown below:

Note that these bonuses stack with the point values for the played tile. 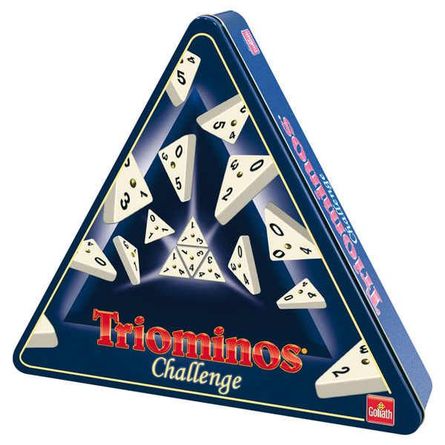