This deck is a collaboration by German "Tarot Expert" Gunter Hager and comic artist Hansrudi Wascher. H. Wascher is essentially a comic-strip artist and this shows in the style utilized in this deck. The Major Arcana have the standard titles except for the Hierophant, who is the High Priest in this deck. Freedoms have been taken with the imagery, and the artist appears to have drawn from a few distinct decks for motivation. A large portion of the cards appears to have been founded on a remarkable viewpoint. The suits are Wands, Disks, Swords and Cups and the Court is King, Queen, Knight, and Page.

The little booklet that accompanies the deck was interpreted in German. Mistakes and syntactic blunders flourish. There is a presentation that gives a short history of the Tarot and some data that is explicit to this deck. The author advocates a less customary way to deal with the cards, liking to allow the imagery to justify itself bad habit remembering book implications. The booklet indicates that this deck is intended to be read without reversals. The translations are conventional sometimes and eccentric in others.

This deck is for the individuals who are searching for something other than what's expected. The deck is distinctive enough from the customary to require a minor venture of time to get comfortable with it. 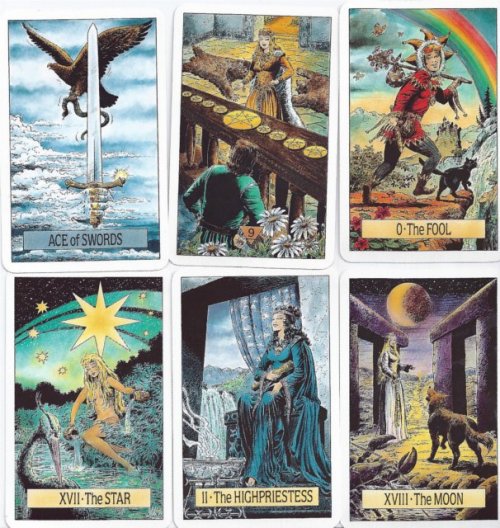