This is a limited/numbered edition deck of 300, published in Milan, Italy by Il Meneghello in 1998. The actual title of the deck, which appears on the bottom of the box as well as the top card, appears to be simply Tarocco. This title gives us a foreshadowing of the elusive facts regarding this deck. The text on the bottom of the box reads Tarocco of 78 cards from an engraving by Della Rocca for F. Gumppenberg, circa 1830. The top card of the deck has slightly different subtitling, which reads Tarocco (78 black and white cards) inspired by cards engraved by Della Rocca in the years 1830-1840 for the publisher Ferdinando Gumppenberg. This is the only information that comes with the deck.

Gumppenberg was a major publisher of Tarocchi decks in Milan, from the late 1700s to well into the 1800s. In about 1830-1835, he published the designs engraved by Carlo Della Rocca, whose tarot illustrations were remarkable for their detail. It is likely that Della Rocca designed the pictures himself, but I don’t believe this is historically certain. We do know that he was the engraver for these designs, which have had such an artistic impact that they were immediately copied by Gumppenberg’s contemporary publishers and by several publishers since then.

The first noticeable characteristic of this edition is that the images are from pencil drawings. This is quite a unique effect, one which I could not fully capture in the pictures below. The illustrations look like they were probably drawn with finely sharpened pencils on medium-toothed paper. The subtlety of the lines, as well as the very fine textures of the shading, began to disappear as I reduced the scans to the screen resolutions of a monitor. These larger samples help to show that the cards reproduce the look of pencils very well, and are printed on a thick, uncoated stock that looks slightly aged.

At first, I thought that perhaps this was a reproduction of actual sketches by Della Rocca, on which he based his engravings for what has come to be known as the Soprafino Tarot; the iconography of this edition essentially follows that of the Soprafino. But considering the differences between the two decks, and the vague wording of this deck’s titling, I believe these cards are freehand sketches by a modern, unnamed artist who used the Soprafino deck as a model. One clue is that the faces on these cards seem to be drawn in a different style. They are very delicately drawn and beautiful, but they don’t look like they were drawn by the artist of the Soprafino deck. The artist of this deck has also taken the liberty of covering some of the nudity seen in the Soprafino; The World and The Star are two examples of this. Regardless of these differences, this is a beautifully drawn deck in its own right.

Considering the substantial card stock that these are printed on, I think it would be feasible to paint these images with a medium such as a gouache. Colored pencils would probably work very well also, combining with even the shaded areas on the cards to give a rich mix of tints and shades. The beautiful shadings of the drawings themselves, though, and the history which inspired it, make this a unique deck as is. 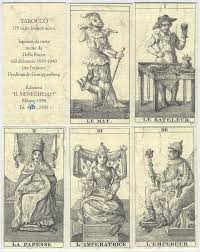