The "Book Of Doors" consists of 65 cards - the eight cards of the eight families, and a final card called the Neter of Neteru, which has no number and belongs to no family. It represents the All, the Absolute.

The deck is slightly smaller than the regular size Tarot deck and is a very nice size for those of us with small hands. The card stock is stiff and glossy, but not coated, and will take care to keep it in good condition.

The backs of the cards have a 1/4" white border, followed by a labyrinth-like series of gold lines that surround a blue scarab on a gold background. The face of the cards has a 1/4" white border, followed by a 1/2" gold border. The family name, number, and function title are presented at the bottom of the card in white on a black background. The pictures themselves are combinations of Egyptian hieroglyphics and symbology.

The authors go into great depth to explain the Egyptian system of deities, the Pythagorean theory of numbers, and the alchemical meanings behind the numbers. Quite frankly - they go into a bit too much depth, sometimes with little backing. I also know more than I thought that I wanted to know about Egyptian hieroglyphics and their pronunciation! Having said that - when I went to do readings with the deck, I found the results fascinating - and accurate. 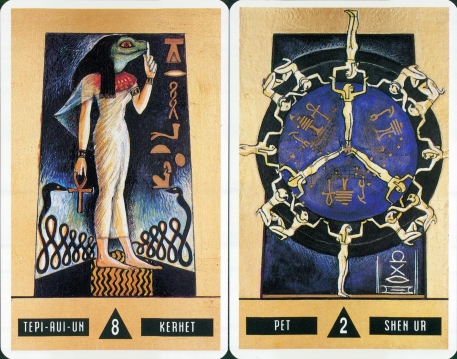