This deck was created by Dolores Ashcroft-Nowicki the leader of the UK-based Servants of the Light esoteric group. Each card has an image and line from one of the many works from Shakespeare's plays to make this tarot deck. This deck accompanies a book that lists the plays referenced, information about the plays, an upright meaning, and a reversed meaning. The numbered title of each card goes across the best, an image contained a scene from one of Shakespeare's plays is flawlessly delivered in the middle, and a statement from the imagined play is composed on the base, including the title of the play. The back has an image of an urn with a plant developing and blooming from it, which renders this deck difficult to handle reversals.

The detailed artwork is delightful and the data on Shakespeare and the plays is exceptionally interesting. The suits are Swords, Crowns, Orbs, and Scepter. The courts are Kings, Queens, Lords, and Ladies. Not extremely common. The creator's just implications for the court cards are as individuals the querent should know. There are three intriguing spreads toward the finish of the book: The Jesse Tree, The Wheel of The Year, and Triangles. They are different from anything you typically get with decks.

Overall, this is a lovely deck. If you love Shakespeare, the book with this deck will interest you. Even though you can read with this deck, some might have difficulty since this deck was made to match the plays and verses together. 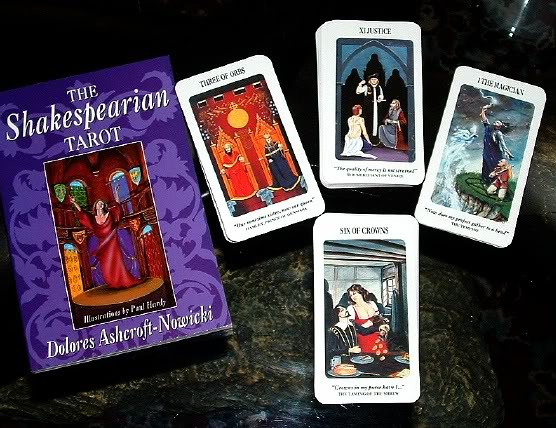