Captain Eric May And The Ghost Troop

Ghost Troop is a gathering of the previous military, insight officials, columnists, analysts, conspiracy theorists, and resident activists who have met up to examine information identified with approaching bogus banner dread assaults. This information is crunched, and afterward circulated to the public through elective media, all in the desire for forestalling another 9/11 style assault inside the United States.

HOW DID GHOST TROOP GET ITS' NAME?

Ghost Troop was named after the valiant military people who lost their lives in the Battle of Baghdad, which occurred at the beginning of the current Iraq war - on April 5, 2003, unit author Captain Eric May identified significant glitches in the media pictures returning from Baghdad, which US powers had recently reached. The journalists had gone from confident April 4, 2003 declarations that the attack of Baghdad had started, too stressed April 5, 2003 declarations that there was a savage battle at Baghdad Airport - at that point out of nowhere and without clarification - away from the creating fight to the "human interest" story that Private Jessica Lynch had been saved from Iraqi captors.

To Captain May, whose specialized topics incorporate military insight and public undertakings, it was quickly certain that the military and media were cooperating to conceal the genuine story: The Battle of Baghdad was occurring behind the scenes, taking cover behind the Private Jessica Lynch story!

The drawdown of the sculpture of Saddam Hussein on April 9, 2003, was another fabricated occasion to show that Baghdad had been involved by US powers.

The following concealment, which Ghost Troop alludes to as the Battle of Baghdad Cover-Up (BOBCUP) was a promulgation mission of the U.S. government, intended to hide the TRUE NUMBERS of the U.S. military passings, which they keep on downplaying right up 'til the present time!

Here are the different articles composed by Captain Eric H. May, Commanding Officer of GHOST TROOP as distributed on THE KENTROVERSY PAPERS.

When Captain Eric May joined the U.S. Army in 1977 at the age of 17, he took an oath that included the following phrase:

"To defend the United States Constitution, from all enemies, both foreign and domestic."

Little did he know at the time, being a boy in a man's Army, that those thirteen words would come to define his life after he concluded his active service, in 1996. While these thirteen words haunted him, it wouldn't be until five years later that his mission became clear to him, both in concept and indeed. "I was a boy soldier," he said, from his home in the Houston area. "I hadn't even begun to shave, and here I was, holding a rifle."

Back in 1977, Captain Eric H. May had begun his military career as an enlisted soldier in the 1st Cavalry Division of the U.S. Army, where he would specialize in chemical warfare. In college, he majored in Latin and Greek Classics, which provided a deep understanding of both linguistics and also philosophy. After putting himself through college, Captain May went into communications as his specialty, where he learned languages such as Russian.

His understanding of these foreign languages had come to him during training at the Defense Language Institute, in Monterey, California. It was his military intelligence training, that had taught Captain May based on his skill and fluency of foreign languages, as well as his expertise of public affairs, to use the mass media to influence public perception of military issues and subject matter. It was in his work in this area, where the Captain was taught how to work with the mass communications media to manipulate the public perception of such matters as Middle Eastern military and socio-political causes.

It was this training that later taught him just how far over the line the dictatorial Bush regime had gone.

Public affairs are supposed to inform the public of issues of importance, which in theory, is supposed to help the public to become better, more informed citizens. However, in the case of the Bush junta, it has been this same area of public affairs that has abused the public trust and has manipulated the public mind. Nowhere has this been more apparent than in the matters of the second Iraq war, and in 9/11 itself. In these two matters, it has been the U.S. government itself that has promulgated the most grandiose "conspiracy theories" of the events in New York City and Baghdad.

From 1992 to 2003, Captain May had published five essays in his hometown newspaper, the Houston Chronicle. Three of these five essays spoke of how U.S. presence in Iraq would turn into "quicksand," and the U.S. would become engulfed in a situation in which there could be no clearly defined winner. The other two essays had predicted failure in Somalia and foresaw a Houston 9/11-2B style attack.

It is this writer's opinion that this war was, by design, degenerated into a no-win situation from which there could not be an early withdrawal. Having a faceless and nebulous enemy would suit the American hegemony well --- as untold hundreds of billions --- perhaps trillions --- of dollars would be spent during the U.S. occupation there. The U.S. had clearly gone to Iraq to stay --- to set up a permanent military presence there --- and to hold the Middle Eastern oil supply hostage.

By the time the Battle of Baghdad began, Captain May had begun to question his recent retirement from the U.S. military. Captain May would come to draw a line in the sand --- where he would re-activate himself in what he would come to describe as a "mission of conscience," to help protect the U.S. Constitution from the onslaught that had been undertaken against it by traitorous liars and thieves who by then, occupied the highest levels of the U.S. federal government.

As the Battle of Baghdad turned sour, the mass media co-opted by the Washington, DC propagandists, was filled with news of the rescue of Private Jessica Lynch. The story was what is known as a psychological operation --- designed to convince the public that her rescue was the most important thing going on at that time. This took the attention away from the Battle of Baghdad, which had fallen under a full media blackout of censorship, and a full-out cover-up.

This cover-up has come to be known by Ghost Troop by the following acronym:

When Captain May first heard about the battle and the ensuing cover-up, he traveled to Fort Stewart, Georgia to confirm what had happened. Fort Stewart is the home base of the 3rd Infantry Division of the U.S. Army. Captain May met with the special forces Col. Neal Dennington, who was a chaplain at the base. In effect, the military cover-up was in effect, the U.S. Constitution was by then, null and void, and the military was then under the thumb of a fascistic Commander-In-Chief, would undergo assassinations to keep the word from spreading, and from falling apart, as the NWO is wont to do.

A July 4, 2003 article in the New York Times mentioned that four-hundred women had become increasingly upset at those in charge at Fort Stewart, who were lying to these women about the fate of their husband-soldiers at the Battle of Baghdad. These military widows, and their newly-fatherless children, were being intimidated and "hugged and drugged," as Captain May himself put it. Adding insult to injury, the military's harsh treatment of these family members was simply too much to take.

After meeting with two of his military buddies from WWII, Captain May came up with the idea for something that would come to be known as GHOST TROOP. Named after and dedicated to those who lost their lives in the Battle of Baghdad, those of the 3/7 Cavalry Division. Captain May reactivated himself as a Commanding Officer in the Info War.

SO, WHO IS A GHOST TROOP, AND WHAT IS THEIR MISSION OF CONSCIENCE?

The group known as GHOST TROOP consists of citizens who have dedicated their lives to fighting on the front lines of the Information War. Among those in this group are retired military, researchers, journalists, and those who produce and broadcast their own podcast shows. The total active and reserve membership is approximately 300 patriots, who have dutifully given up their own personal comfort and safety for the GREATER GOOD -- one aspect of which is analyzing data related to forthcoming false-flag terror attacks, in the hopes of preventing such attacks from happening.

Captain May describes the GHOST TROOP objectives as a "Mission of Conscience." This is where something so egregious has happened that it must be opposed at all costs. This is because it goes against the oath originally taken upon joining the military. This is to protect the U.S. Constitution against all enemies, both foreign and DOMESTIC. In this instance, it was also the emergence of a fascist dictatorship, ruled by military might, and the mass murder of 3,000 Americans on 9/11, war crimes at Abu Gharib and Guantanamo Bay prisons, and the two stolen Presidential elections of 2000 and 2004.

A "Mission of Conscience" is something that must be done, as to remain silent is to provide consent. In my own life, I decided that the best way for me to become involved in the Info War was to use my skills as a research journalist to educate the public about what confronts them at the present time. Thus, on June 17, 2005, I joined the Info War on a full-time basis, by publishing The Kentroversy Papers, which continues to have a growing readership. By the end of the first year online, TKP had risen to the TOP 1% of all blog sites, as ranked by Technorati. We are now in the TOP 100,000 blogs, out of 45.7 million total blog sites.

Among the most important aspects of Ghost Troop is the analysis of data related to terror alerts and the threat of new attacks from within. Because Bush Jr. is currently at an all-time low for Presidential approval ratings -- even lower than Nixon at the lowest of his Watergate lows -- America is in great danger of a new attack on the heartland. And, because these Bush adherents make their money in the energy industry -- we are in danger of an attack on a Texas oil refinery.

"I believe that Ghost Troop has accomplished historic deeds with our successful defense of American cities. I believe we are the first military unit since the Civil War to have saved American lives -- tens of thousands of them -- on American soil."

The mission dates/events were: 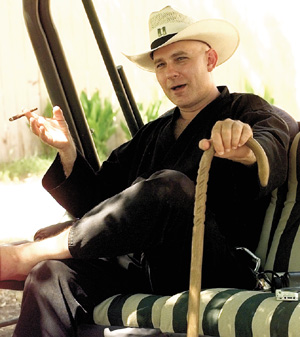