This was meant to be a one-box does it all replacement for a center channel speaker. The box has a total of 10 speaker drivers; 2-6.5 inch woofers on the sides, 5-3 inch drivers across the front, and 3-3/4 inch dome tweeters spread out across the front. It's designed to sit under a 42 inch TV set, and run by itself or as a center speaker in a multi-channel surround sound setup. The inputs are line level, not speaker level. It's more optimized for music than movies that have discrete steering of special effects (a plane flying overhead). It does have the option to separately drive the center driver from an external source, which may be preferred for movies. A pre-processor chassis has a 4 pole active Linkwitz-Riley crossover network, active woofer EQ, and a 4 section Baxandall tone control circuit (Lo, Mid-Lo, Mid-Hi, and Hi). It drives a 4 channel power amp (4 X 50 watts RMS into 8 ohms), which drives the speaker cabinet. The cabinet has passive L-XR wiring (to turn a 2 channel feed into 3 channels), and the Polk method of creating an acoustic hologram. The speaker system is 3 way, with crossovers at 150HZ (4 poles active) and 7kHZ (1 pole passive). 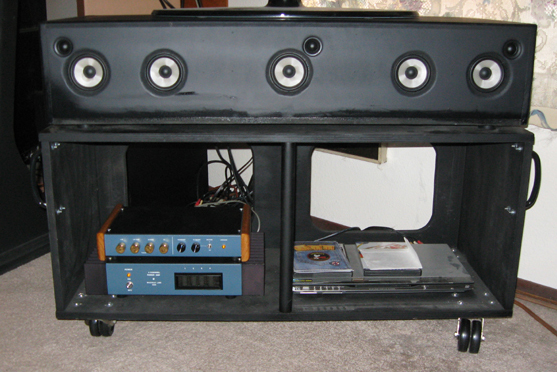