An “Assquatch” is a mounted deer's butt that's shaped to look like a face. Much like Sasquatch, the Assquatch is known by many different names. We’ve all seen a taxidermy deer head on someone’s wall. But have you ever thought about what happens to the rest of the deer? Sure, some of it gets turned into venison, but the remaining skin, fur, and bones would go to waste.

Unless they get turned into an Assquatch, that is. Some refer to them as “Swamp Boogers.” Others call them “Deer Butt Alien Heads.” Also like Sasquatch, the Assquatch can be elusive. They’re not often seen in people’s homes; they’re typically found at tattoo parlors or dive bars, where they serve as quirky conversation pieces. If you wanted to buy an Assquatch, you’d have to scour Craigslist and eBay and be willing to pay a couple of hundred bucks.

Assquatches come in all shapes and sizes, and there’s no standard form they have to take. They don’t even have to be made from deer parts. The only qualification is that it has to be a monster face, made from an animal’s butt.

Assquatches belong to a taxidermy style called “gaff taxidermy.” That’s where taxidermists use real animal parts to make mythical animals. You’ve probably heard of a jackalope, a jackrabbit-antelope hybrid. Or the Fiji mermaid, which was created in 1822 when a bunch of sailors sewed a monkey’s body onto a fishtail. (Gotta entertain yourself during those long sea voyages somehow.) Ripley’s Believe It or Not has been featuring them for decades.

But there’s a new wave of Assquatch-makers who don’t appreciate the craft of making Assquatches by hand. Some companies will sell you a pre-made head, made from imitation chimpanzee skulls, wolf snouts, and reptile eyes–basically doing all the work for you.

The Assquatch community is divided, and may very well tear itself apart. What’s needed is a visionary, someone who can rise up and lead these warring Asquatch factions.

We need a unifier. We need a Da Vinci of Deer Assholes. 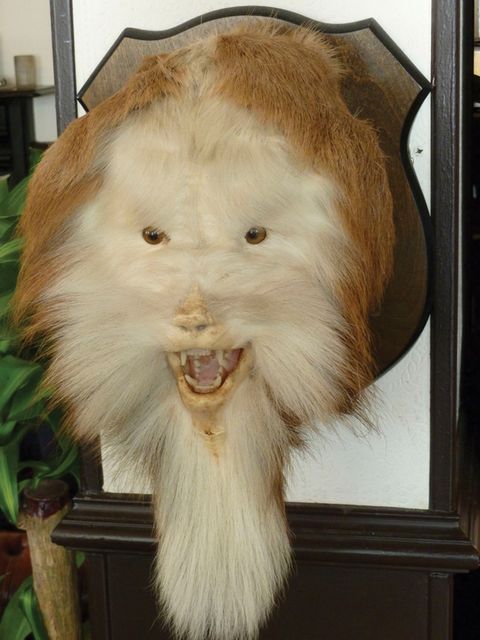