Hi, folks, it's the Oregonian who only posts 5 times a year! Most of

Well... either I haven't been paying attention, or nobody's posted a

a big review of "Age of Impact" yet. (Most likely the former, I know.)

So, let me take this opportunity to do just that. In light of recent

accusations by someone dubbed "Memkil", I'm also going to post

something intellectual to the Jam (hehe), so this'll serve two purposes.

But enough about me. Time for some pure opinions...

store to pick up my weekly ration of bagels, meats, and cheese... and

just now got the chance to listen to it today. I've decided to

John Petrucci, as always, manages to create some beautiful solos that

shine and bring new colors to the music surrounding them. I'm

perpetually amazed at this man's ability to play melodically and

sonorously with incredible precision. I now know the reasons why some

of you are fanatical about John and his playing... :)

well, throughout the whole album. Guillory, your synth lead tone

rocks. I can't wait to hear what you've got on the new DD album.

Derek, your synth tone didn't seem quite as strong as other stuff I've

heard on FII (i.e., Lines in the Sand), but the solos were still very

James LaBrie rocked on tracks 3 and 5! I was actually able to

sheet. Very well done... it adds an interesting touch to hear his

a voice among and interwoven between the other vocalists (e.g., DC

Cooper), and the vocal variety on this album helps offset some of the

The rhythm section played some very well-constructed and

playing, but Wayne Gardner proves himself to be a competent rhythm

a guitarist as well. Nice job on the riffs, especially Track 3. That

the riff is still grabbing me in some very interesting ways.

This leads me into the "Minus" section rather quickly...

Terry Bozzio's drum sounds did NOT FIT INTO THE MIX, in my opinion. I

religiously), but I'm still set off by the contrasting sound of the

drums and bass. The two just don't mix well together, especially in

the first track. The rest of the instruments sounded like they were

playing in a large cavern, but Bozzio's drums were locked in a small

tiny room. The mixing of the two did not come off very well at all to

Perhaps it's because, with the music style, I was expecting a more

the rhythm section... which would probably have fit in better with the

rhythm guitar and bass tone. Bozzio's cymbals seem to be too

expected, and of course, the kick drum isn't loud enough. To me, the

The snare drum also sounds way too loose... it's not tight enough to be as

precise as the music demands.

Truth be told, I was expecting something between Mike Portnoy and Def

his lead sound is .... well, not leading. It didn't quite grab me as

much as it could've... sounds too passive to be a strong lead sound.

Minus (and a nitpicky one at that):

Billy Sheehan, satisfy my pickiness and buy yourself an

honest-to-goodness 6-string bass. Glub knows you play up in the high

range all the time, and tuning that E down to a low C (or B) just

sounded horribly muddy compared to the rest of your range. You'd like

In fact, you could buy my old one. It's an Ibanez Soundgear 6-string

with neck-thru-body and active electronics. I'd even sell it to ya

through track 3, I realized most of the lyrics had already been sung

To me, the lyrics in this CD don't "go anywhere". They bring up some

good ideas and create an atmosphere of thought, but it doesn't really

accomplish much. It stays on the same subject matter, it repeats

itself, and it's only at the end of track 5 that a resolution or

the conclusion is reached.

Now some may say "well, all concept albums do that". In a manner of

speaking, most concept albums have lyrics that tell a story, which

progresses, rises, and falls as it goes on, reaches conflict and

the resolution, and has a suitable conclusion. The lyrics here don't seem

to have any story, any progression, any change in the conflict.

Track 4, during the bridge/solo section in the middle. Anybody else

think too much is happening in this quiet spot on the CD? Gardner's

key solo is beautiful... Bemesderfer's winds are quite melodic...

heavy traffic and Howe's guitar work needs no praise. But all

together, I think they tend to trample each other into the ground of a

murky prog-mud. Paired or singled out, these musicians would be able

to produce a much better solo section.

The synth backgrounds tend to sound the same, after a while. Perhaps

I'm picking at nits here, but most of what I remember (and I'm only on

my second listen now, so bear with me) is the synth-piano or

synth-orchestra patch and not a whole lot else. Of course, it sounds

heavenly when set against Petrucci's solos (e.g., end of track 2), but

it's the same thing over and over again.

Overall, I'm not very impressed with this CD. I'd honestly like to

and ask them if they've ever HEARD a YES album. I mean, granted, it's

well constructed rhythmically, but this album lacks a lot of the

characteristics I'd expect in a prog-rock classic.

traits that make their music unmistakable YES. It's like hearing

Jethro Tull without any flute, guitars, or folk influences. It's like

Or, perhaps more concisely... it's like chewing on a 5-day-old cake

End of preview mode. I hope nobody takes this as an insult to any of

the contributors on this CD, because it's not that at all. Especially

Trent Gardner -- I understand the guy poured a great deal of his life,

heart and soul into this, so no offense to him at all. Good job on

the trombone there, Trent, that solo did sound really good. <* pats

Trent gently on the back and tiptoes away... *>

Okay, later all... by my count, I only have three posts left for the

> Unfortunately, much of the lead guitar was muted as

> well, but I was kind of getting into the small orchestra they had on the

> stage. It was like watching an instrumental Kashmir, and I kind of dug

As I recall, most of the musicians on the SNL stage (Puff Daddy excluded)

didn't really seem to be getting into the song as much as they should have.

Glad you mentioned that... for the past few months, the Symphonic Led

Zeppelin's album, entitled "Kashmir", has been in record stores. Highly

For those who are wondering... there are NO samples of Puff Daddy or any

other rappers on this CD. Most of the tracks are purely orchestral, with two

"ambient mix" tracks to start and finish the album. All in all, very

tastefully done... an intelligent and artistic reworking of some of my

favorite Led Zeppelin songs. Their version of "When The Levee Breaks" is

my favorite track on the album.

Anyone else has this? Comments?

Last night's concert absolutely kicked butt. For the sake of those who

don't want spoilers, I'll try not to post a whole setlist... but they did

play most of the radio songs as well as about 5 to 6 from the new album.

Good mix of songs altogether, some from O:M, Empire, and Promised Land.

"Bridge" absolutely kicked ass... they all got out their acoustic Carvin 12

and 6-string guitars... Eddie grabbed a 5-string bass for ONLY this song

that night... and it just plain rocked. He needs to use that more. :)

Geoff was wearing a suit jacket, slacks, and some multi-colored shirt.... and

dancing shoes. Kinda struck me as funny. Man, that guy sang with every

an ounce of his being... very powerful.

I wasn't a real serious QR fan before the concert, but I think I'm gonna

buy Empire and PL as soon as possible now. It was *THAT* good.

Do any other Jammers make it to that show? Mike Estok ("Michelob" on IRC) and

I didn't see too many DT T-shirts last night (only one, in fact)...

Wow. I was impressed.

Now, bonus points for the name of Opus's almost-wife. 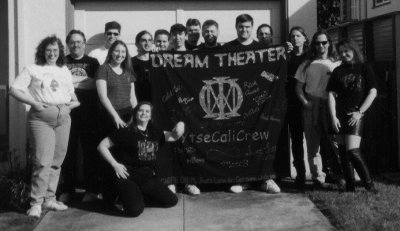