Photographic artist Edwin D. Jorgensen caught this picture of Portland High School around 1899. Built somewhere in the range of 1883 and 1885, the structure remained at the intersection of SW Fourteenth and Morrison roads for a very long time and fill in as a secondary school until 1912. It housed fifteen homerooms, two recitation rooms, a library, historical center, lab, craftsmanship room, model room, managerial workplaces, and an enormous gathering lobby. The structure's amazing size and Semi-Norman design style recommended that secondary school was to be a lasting part of state-funded school training in Portland.

Public secondary school had unassuming and provisional beginnings in Portland. Educational committee authorities opened the city's first open secondary school on April 26th, 1869 of every two rooms of a current elementary school. Educator J.W. Johnson, who later turned into the main leader of the University of Oregon, driven the first gathering of 45 researchers as their head. Before this time the best way to get training past syntax school was to go to one of the city's private optional schools. A few adversaries of public secondary school liked to keep it as such—they thought it was superfluous and out of line for citizens to help training past the essential level.

Notwithstanding opposition, the organization developed an educational plan normalized throughout the following fifteen years. In 1873 a leading group of inspectors led the main composed test for advancement from grade school to secondary school. In 1875 five students, of the 121 absolute enlisted, finished a fulfillment assessment and made Portland's first secondary school graduating class.

As the school extended it migrated multiple times preceding the development of the Portland High School building. Educational committee chiefs cast a ballot to raise a structure principally for secondary school use in 1883. To finance the development, they collected an additional assessment. Development ended for almost a year in 1884 because costs enormously surpassed unique evaluations, clashes over quality emerged between educational committee chiefs and project workers, and citizens became eager. After the chiefs got extra subsidizing and the workers for hire gained ground, Portland High School's first classes met in September 1885. Throughout the following decade, expanded enlistments steadily filled the stupendous structure, and the public secondary school turned into an undisputed installation in the city. 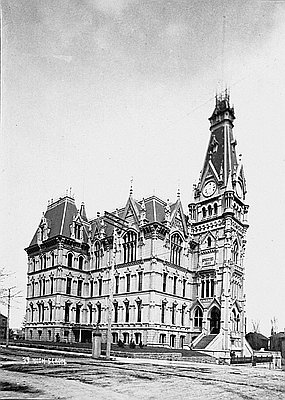