What are the Five Solas?

The Five Solas are five Latin phrases that represent the core positions held by those who adhere to the Protestant Reformation that happened in the 16th century. They are more commonly recognized within the Reformed (Calvinist) perspective. The Five Solas are Sola Scriptura, Solus Christus, Sola Gratia, Sola Fide, and Soli Deo Gloria.

This does not mean that tradition or councils are not considered. It means that the Scriptures alone are the final and the highest authority. Everything that the Scriptures address is to be used as the final word on that topic. All things that we learn from other sources must be compared to Scripture, and if they do not match Scripture or if they contradict Scripture, then we are not to affirm them. The Bible says not to exceed what is written (1 Corinthians 4:6).

This position means that Christ Jesus is the only means of salvation (John 14:6), the only mediator (1 Timothy 2:5) and that Jesus is the only human revelation of God. In other words, God has revealed Himself in the person of Jesus, and no other person who has ever lived is God in the flesh (John 1:1, 14).

This means that we are saved from our sins and damnation by the unmerited grace of God alone without any of our works. Grace is the completely unmerited, undeserved favor of God that he bestows upon us. The grace of God is completely motivated out of his own character and is his kind intention and merciful action upon various individuals. Thus, we are saved from his righteous judgment by his unmerited and unearned favor, and there is nothing that we can do or have done that can move God to be gracious to us.

This means that we are saved from our sins by faith alone in Christ, and not by faith and anything we do, whether it be baptism, church membership, good works, sincerity, or anything else. God is the proper object of faith. When we have faith in the work of Christ and his sacrifice on the cross, we are justified (Romans 5:1).

This means that God alone is the one who is to receive all the glory. He alone is the author and finisher of our salvation and works all good things through our lives. He has revealed Himself in the person of Jesus, and in great humility and love, died on the cross bearing our sins (1 Peter 2:24) so that we might enjoy his presence forever. We are to live for Him and glorify Him (Isaiah 43:7).

1. Scripture: Roman Catholicism denied the sufficiency of Scripture and sought to consider sacred tradition as of equal value.

2. Christ: Though it did affirm that Christ was the only means of true salvation, it adds the intercession of the Saints and Mary as an additional means of accessing God.

3. Grace: Furthermore the Roman Catholic Church denied that a person’s sins are forgiven by the unmerited grace of God alone. Catholicism teaches that salvation is merited by obedience to the commandments.

4. Faith: In addition, Roman Catholicism condemns the idea of faith alone and says that salvation is dependent on faith and participation in the sacraments, among other things.

5. Glory: The Roman Catholics largely say they seek the glory of God. it is unfortunate that too much of the glory and adoration given is focused on the Pope and Mary. 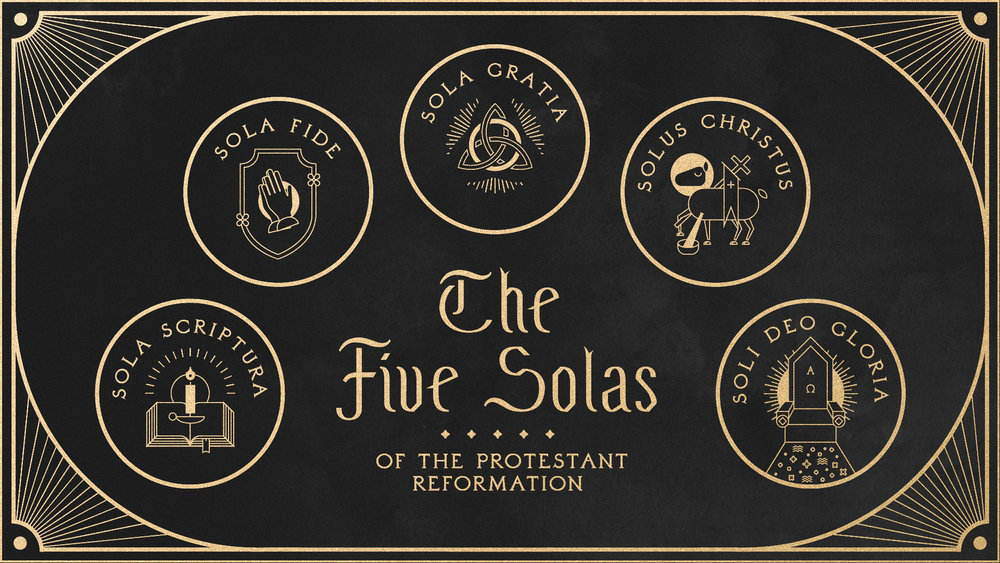