The Five Solas Of The Reformation

The Protestant Reformation of the sixteenth century changed Christianity until the end of time. Awakened to activity by the debasement and misuses they found in the Roman Catholic church of the time, visionary ministers and pioneers like Martin Luther and John Calvin led a development that changed Christianity and in the long run prompted the rise of the Protestant divisions that exist today.

The Reformers were directed by the conviction that the congregation of their day had floated away from the fundamental, unique lessons of Christianity, particularly as to what it was instructing about salvation—how individuals can be pardoned of transgression through the demise and restoration of Jesus Christ and get endless existence with God. The Reformation tried to re-arrange Christianity on the first message of Jesus and the early church.

The Five Solas are five Latin expressions (or mottos) that arose during the Reformation, to sum up, the Reformers' philosophical feelings about the fundamentals of Christianity.

The Five Solas are:

Sola scriptura emphasizes the Bible alone as the source of authority for Christians. By saying, “Scripture alone,” the Reformers rejected both the divine authority of the Roman Catholic Pope and confidence in sacred tradition. Only the Bible was “inspired by God” (2 Peter 1:20-21) and “God-breathed” (2 Timothy 3:16-17). Anything taught by the Pope or in a tradition that contradicted the Bible was to be rejected. Sola scriptura also fueled the translation of the Bible into German, French, English, and other languages, and prompted Bible teaching in the common languages of the day, rather than in Latin.

Sola Fide emphasizes salvation as a free gift. The Roman Catholic Church of the time emphasized the use of indulgences (donating money) to buy status with God. Good works, including baptism, were seen as required for salvation. Sola fide stated that salvation is a free gift to all who accept it by faith (John 3:16). Salvation is not based on human effort or good deeds (Ephesians 2:9).

Sola Gratia emphasizes grace as the reason for our salvation. In other words, salvation comes from what God has done rather than what we do. Ephesians 2:8-9 teaches, “For by grace you have been saved through faith. And this is not your own doing; it is the gift of God, not a result of works, so that no one may boast.”

Solus Christus, “through Christ alone”) emphasizes the role of Jesus in salvation. The Roman Catholic tradition had placed church leaders such as priests in the role of intercessor between the laity and God. Reformers emphasized Jesus’ role as our “high priest” who intercedes on our behalf before the Father. Hebrews 4:15 teaches, “For we do not have a high priest who is unable to sympathize with our weaknesses, but one who in every respect has been tempted as we are, yet without sin.” Jesus is the One who offers access to God, not a human spiritual leader.

Soli Deo Gloria emphasizes the glory of God as the goal of life. Rather than striving to please church leaders, keep a list of rules, or guard our own interests, our goal is to glorify the Lord. The idea of soli Deo Gloria is found in 1 Corinthians 10:31: “So, whether you eat or drink, or whatever you do, do all to the glory of God.”

The Five Solas of the Protestant Reformation offered a strong corrective to the faulty practices and beliefs of the time, and they remain relevant today. We are called to focus on Scripture, accept salvation by grace through faith, magnify Christ, and live for God’s glory. 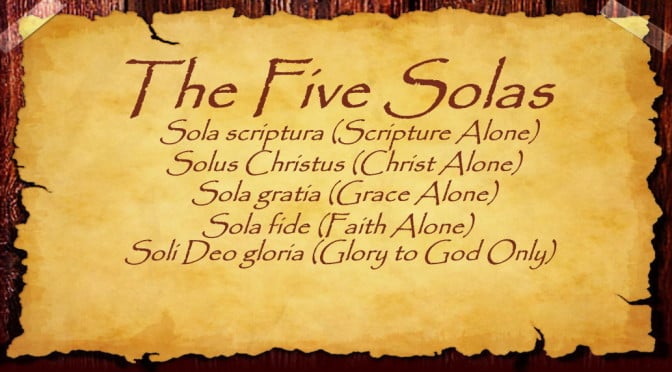