The "Five Points" of Arminianism

1. Free Will or Human Ability

Although human nature was seriously affected by the fall, man has not been left in a state of total spiritual helplessness. God graciously enables every sinner to repent and believe, but He does not interfere with man's freedom. Each sinner possesses free will, and his eternal destiny depends on how he uses it. Man's freedom consists of his ability to choose good over evil in spiritual matters; his will is not enslaved to his sinful nature. The sinner has the power to either cooperate with God's Spirit and be regenerated or resist God's grace and perish. The lost sinner needs the Spirit's assistance, but he does not have to be regenerated by the Spirit before he can believe, for faith is man's act and precedes the new birth. Faith is the sinner's gift to God; it is man's contribution to salvation.

God's choice of certain individuals unto salvation before the foundation of the world was based upon His foreseeing that they would respond to His call. He selected only those whom He knew would of themselves freely believe the gospel. Election, therefore, was determined by or conditioned upon what man would do. The faith which God foresaw and upon which He based His choice was not given to the sinner by God (it was not created by the regenerating power of the Holy Spirit) but resulted solely from man's will. It was left entirely up to man as to who would believe and therefore as to who would be elected unto salvation. God chose those whom He knew would, of their own free will, choose Christ. Thus the sinner's choice of Christ, not God's choice of the sinner, is the ultimate cause of salvation.

Christ's redeeming work made it possible for everyone to be saved but did not actually secure the salvation of anyone. Although Christ died for all men and for every man, only those who believe in Him are saved. His death enabled God to pardon sinners on the condition that they believe, but it did not actually put away anyone's sins. Christ's redemption becomes effective only if a man chooses to accept it.

4. The Holy Spirit Can Be Effectually Resisted

The Spirit calls inwardly all those who are called outwardly by the gospel invitation; He does all that He can to bring every sinner to salvation. But inasmuch as man is free, he can successfully resist the Spirit's call. The Spirit cannot regenerate the sinner until he believes; faith (which is man's contribution) precedes and makes possible the new birth. Thus, man's free will limits the Spirit in the application of Christ's saving work. The Holy Spirit can only draw to Christ those who allow Him to have His way with them. Until the sinner responds, the Spirit cannot give life. God's grace, therefore, is not invincible; it can be, and often is, resisted and thwarted by man.

Those who believe and are truly saved can lose their salvation by failing to keep up their faith, etc. All Arminians have not been agreed on this point; some have held that believers are eternally secure in Christ--that once a sinner is regenerated, he can never be lost.

by the Synod of Dort

This was the system of thought contained in the "Remonstrance" (though the "five points" were not originally arranged in this order). It was submitted by the Arminians to the Church of Holland in 1610 for adoption but was rejected by the Synod of Dort in 1619 on the ground that it was unscriptural.

The "Five Points" of Calvinism

Because of the fall, man is unable of himself to savingly believe the gospel. The sinner is dead, blind, and deaf to the things of God; his heart is deceitful and desperately corrupt. His will is not free, it is in bondage to his evil nature, therefore, he will not--indeed he cannot--choose good over evil in the spiritual realm. Consequently, it takes much more than the Spirit's assistance to bring a sinner to Christ--it takes regeneration by which the Spirit makes the sinner alive and gives him a new nature. Faith is not something man contributes to salvation but is itself a part of God's gift of salvation--it is God's gift to the sinner, not the sinner's gift to God.

God's choice of certain individuals unto salvation before the foundation of the world rested solely in His own sovereign will. His choice of particular sinners was not based on any foreseen response or obedience on their part, such as faith, repentance, etc. On the contrary, God gives faith and repentance to each individual whom He selected. These acts are the result, not the cause of God's choice. Election therefore was not determined by or conditioned upon any virtuous quality or act foreseen in man. Those whom God sovereignly elected He brings through the power of the Spirit to a willing acceptance of Christ. Thus God's choice of the sinner, not the sinner's choice of Christ, is the ultimate cause of salvation.

Christ's redeeming work was intended to save the elect only and actually secured salvation for them. His death was a substitutionary endurance of the penalty of sin in the place of certain specified sinners. In addition to putting away the sins of His people, Christ's redemption secured everything necessary for their salvation, including faith which unites them to Him. The gift of faith is infallibly applied by the Spirit to all for whom Christ died, therefore guaranteeing their salvation.

4. Irresistible Grace or The Efficacious Call of the Spirit

In addition to the outward general call to salvation which is made to everyone who hears the gospel, the Holy Spirit extends to the elect a special inward call that inevitably brings them to salvation. The external call (which is made to all without distinction) can be, and often is, rejected; whereas the internal call (which is made only to the elect) cannot be rejected; it always results in conversion. By means of this special call the Spirit irresistibly draws sinners to Christ. He is not limited in His work of applying salvation by man's will, nor is He dependent upon man's cooperation for success. The Spirit graciously causes the elect sinner to cooperate, to believe, to repent, to come freely and willingly to Christ. God's grace, therefore, is invincible; it never fails to result in the salvation of those to whom it is extended.

5. Perseverance of the Saints

All who are chosen by God, redeemed by Christ, and given faith by the Spirit are eternally saved. They are kept in faith by the power of Almighty God and thus persevere to the end.

by the Synod of Dort

This system of theology was reaffirmed by the Synod of Dort in 1619 as the doctrine of salvation contained in the Holy Scriptures. The system was at that time formulated into "five points" (in answer to the five points submitted by the Arminians) and has ever since been known as the "five points of Calvinism." 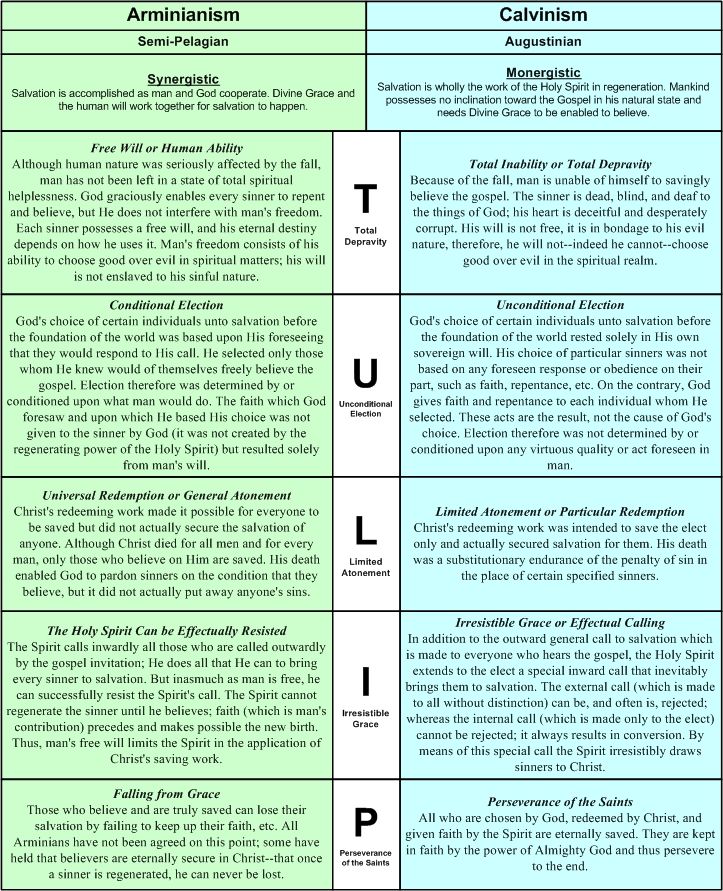